We woke up in Saranac Lake at 5:30am. This felt like a nice sleep in, since we are used to staying further away on the Friday night before our hiking weekends. The drive to the Loj was uneventful, and it looked promising weather-wise. We paid the $12.00 parking fee and got a spot right beside the trailhead. This time I had a great idea! I would reverse into the spot, so people won’t see the huge commotion it is for us to get all our crap ready for our hikes! After force feeding ourselves and packing our bags, we hit the trail at about 6:45am.

We quickly passed the familiar boardwalk. It seems to be leaning a lot more than the last time I saw it! The first part of the trail was pretty drab and un-interesting as there were no leaves on the trees and there was quite a bit of mud. 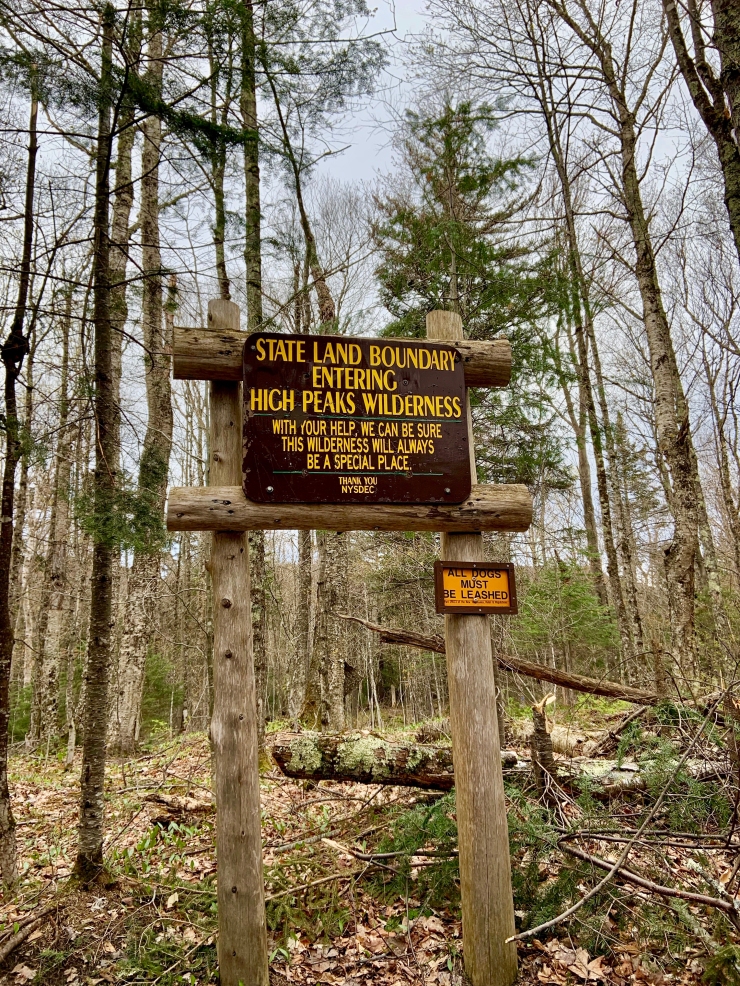 The day was starting out to be pretty overcast, but the sun was supposed to come out around 10am. As long as its not raining I’m happy…

We got to the first junction where the trail goes to the left towards Phelps and Mount Marcy and Right for Algonquin and Wright. It took us about 30 minutes to get to this point. We veered to our left and continued the 1.2 miles onto Marcy Dam.

We continued on and reached Marcy Dam at 7:45am. We were moving at a good pace (for us)! I stopped to investigate the privy that disturbed me so much on our winter hike. Phew, it was way less disgusting and the door was repaired! I didn’t need it so early on in the hike, but it was good to know it was in better shape.

The clouds were lifting and the sun was starting to come out! The clouds moving over the mountains were cool but I was just looking forward to being at the top! 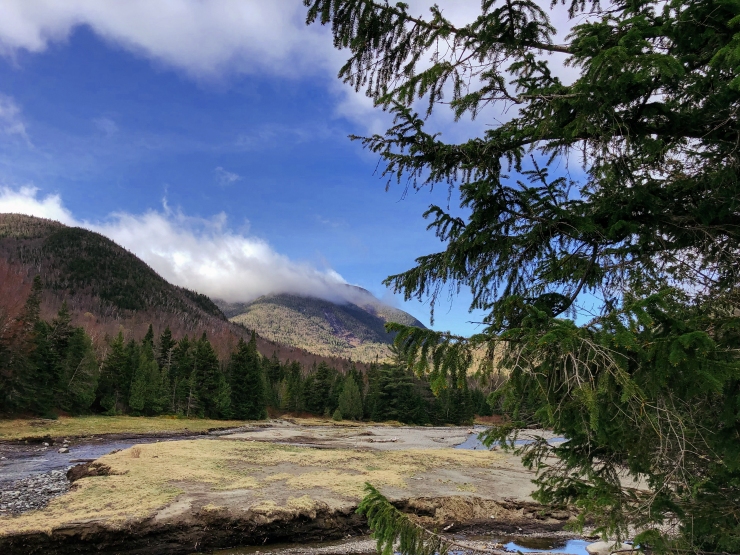 We saw quite a few tents peeking out from behind the trees and talked about how it would be fun to attempt camping out here one day. 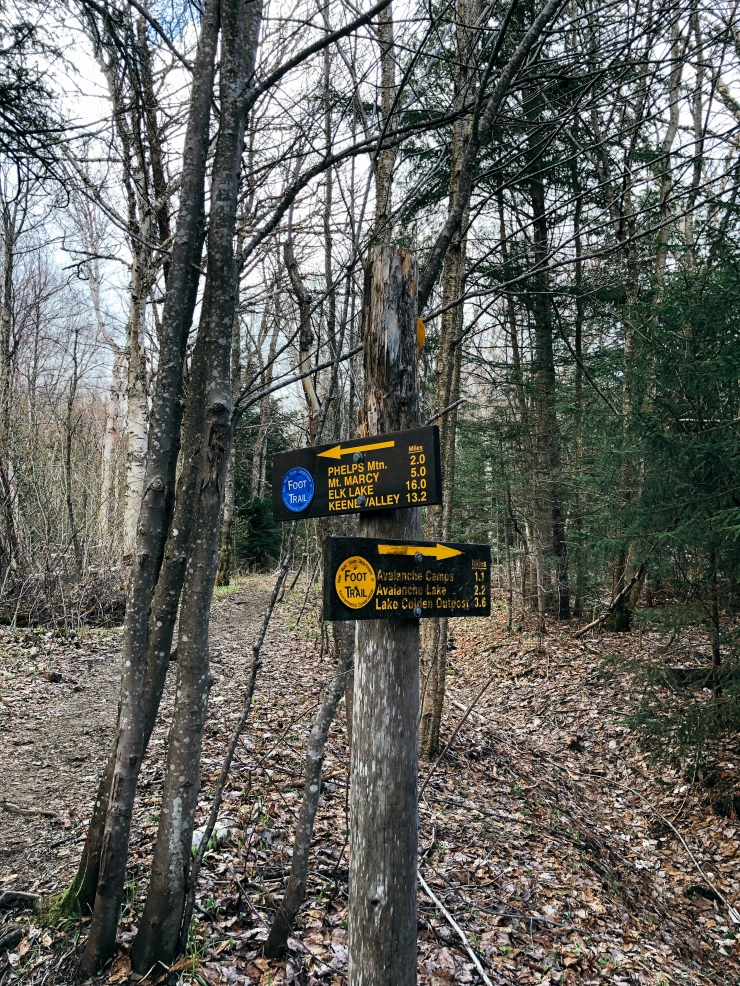 After leaving Marcy Dam you have about 2 miles until the summit of Phelps. It was a nice warm-up but we knew the climbing would be starting soon. We kept talking about how different the trail was from when we hiked it in the winter and how we didn’t remember anything.

We took a few bridges to cross over the rivers and continued onto the Van Hoevenberg trail. From Marcy Dam to the Phelps junction the trail starts to gain more elevation but overall it is pretty tame. No rock scrambling, just your typical boulders and rocks. 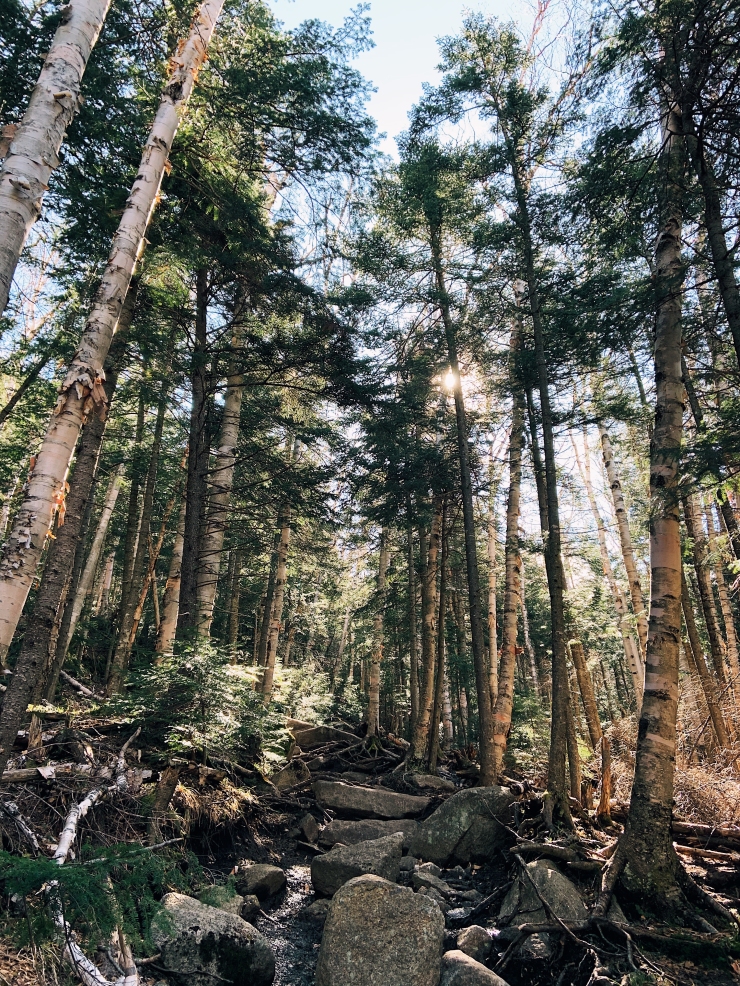 The trail was pretty at this time of day, with the sun peeking through the trees and the weather was perfect for hiking. At around 8:40 we reached the junction to the Phelps trail. We felt like we were doing great but we knew the hard part was still to come.

We were looking forward to taking a mini break at the big boulder at the Phelps junction. This was a great sitting spot during winter but definitely not in the summer. Onwards!

The very start of the Phelps trail is similar to the Van Hoevenberg trail. Just your typical boulder trail. Nothing too intimidating but it was definitely starting to get steeper. I had read some reports with people saying how steep the last mile to Phelps was but it was not nearly as bad as I was expecting. 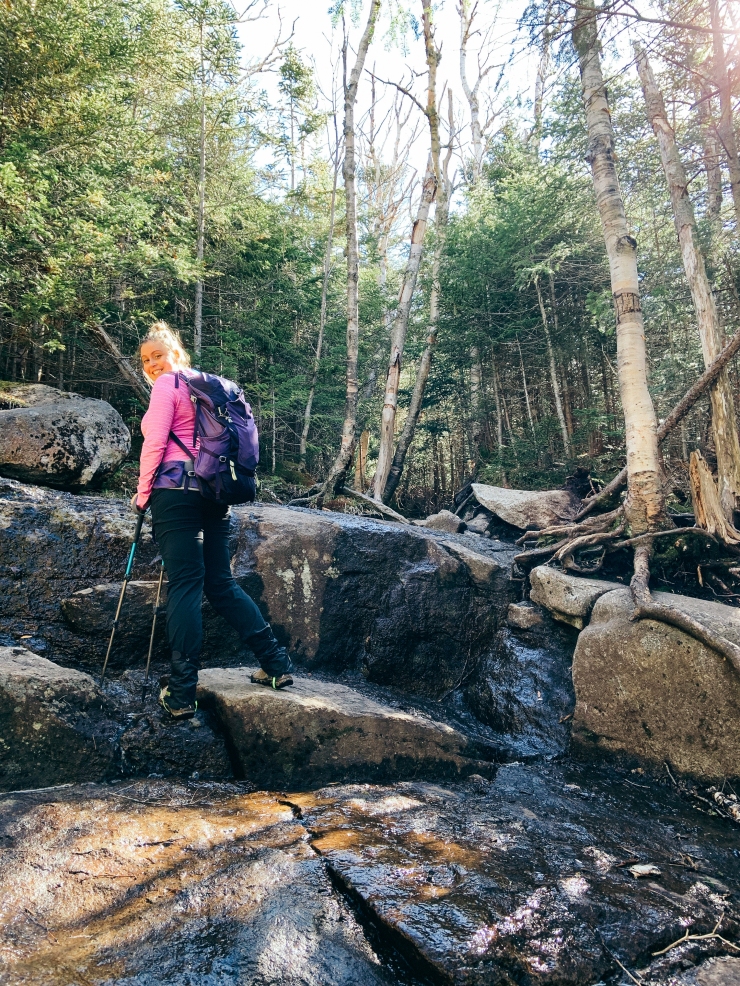 The trail starts to get steeper and then there are a few rock scrambles closer to the top. Nothing too terrifying though!

I didn’t take any pictures of the trail after this because I didn’t want my phone to fall out of my pocket but right before the summit you can look behind you for some amazing views!

After a bit of steep climbing we knew we were almost at the summit. We noticed a group of Frenchies standing and looking ahead at the trail so we wandered over that way. They stopped right in front of a major mud pit and seemed to be planning their route of attack. The group leader said to us “Go ahead, its cool to get dirty” and forced us to go ahead into the mud pit. We darted through as fast as possible, and wandered through some thick brush and popped out at the summit. Shortly after we realized that was not the path and the mud pit was completely avoidable. Oh well!

Since we passed the Frenchies we were the first ones on the summit that day! I quickly climbed down to the ledge aka “Phelps chair.” We then proceeded to have the most relaxing time at a summit yet.

We gorged on bacon jerky, summit storm gatorade and summit chips. The weather was perfect and we did not want to leave. 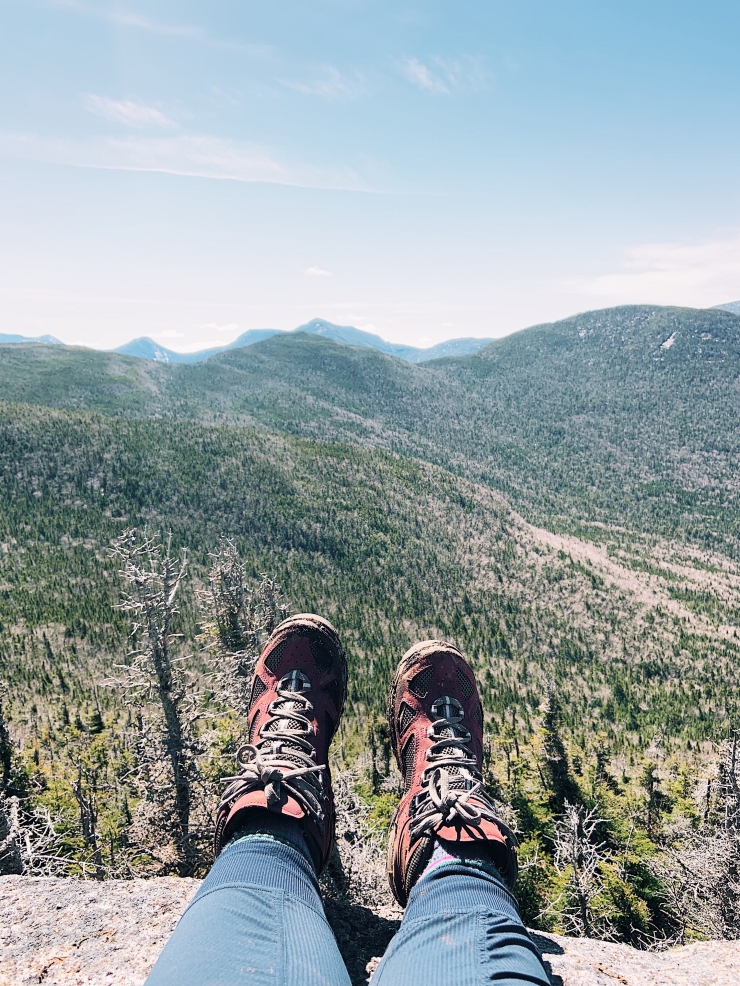 After about 30 minutes of relaxing the summit was starting to get pretty crowded. We felt like it was our time to get going and let some other people have the best spot on the mountain. 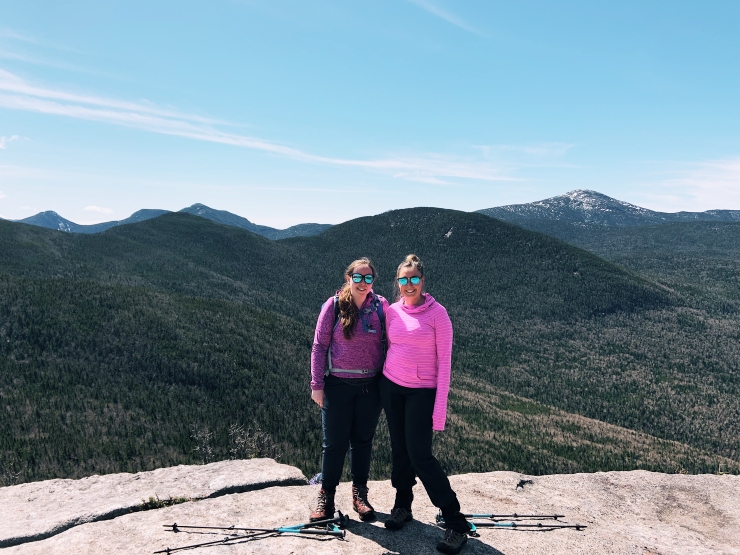 We left the summit, and headed back down, this time avoiding the giant mud pit. The mile back down to the Van Hoevenberg trail seemed to go by slowly, but we knew this was the hardest part and after this it would be pretty much smooth sailing. There were some nice views ahead of us so we stopped for some more pictures. 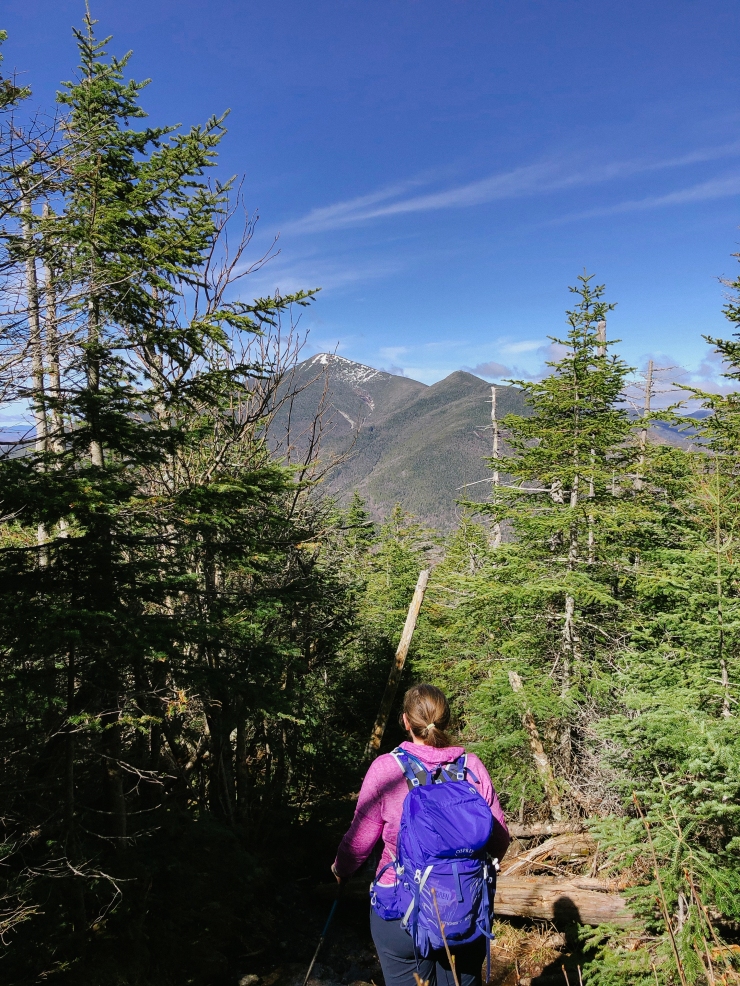 We got back to the Van Hoevenberg trail without incident and continued back to Marcy Dam. On the way back this seemed to take a lot longer and it was rockier than we remembered. Still not too bad…

We crossed my favourite bridge and soon enough we were back at the trail register at Marcy Dam.

The weather was pretty nice so we laid down and basked in the sun for awhile. We didn’t want to move, but after about 20 minutes we decided it was time for the last push back to the Loj. 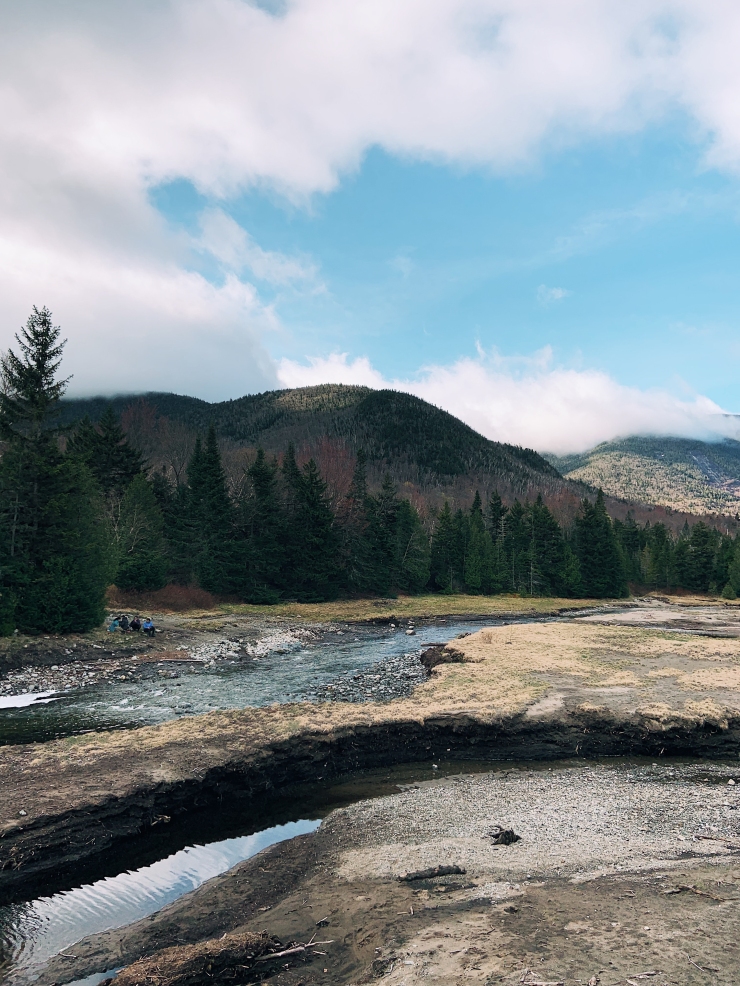 We booked it out of there and were making good time. Finally we crossed that wooden bridge and talked about how that part feels like forever and the little hills you have to go up at the end always feel so much harder than they really are. Finally we could see the shining cars through the trees and we signed out at the trail register.

I have to say, Phelps is probably the easiest high peak I’ve done. It is pretty gradual, and the aren’t any really difficult scrambles. The summit is amazing too!

There was an error retrieving images from Instagram. An attempt will be remade in a few minutes.