In October I decided I was going to attempt to climb all 46 “4000+ footers” in the Adirondacks. After going to the Adirondacks a few times last summer I was hooked. After seeing a few cars with a sticker that said “46er” I was curious. I had seen 46ers mentioned a few times when doing research as well. After I climbed my first high peak (Cascade) in August I loved the view and the challenge so decided I would try. My sister is also along for the challenge. (Heidi if you are reading this, I am serious.)

Since I live over 5 hours away from the high peaks I have given myself until I turn 36 to complete this challenge. I decided to call my challenge “46 by 36” although I have just over 7 years I would really like to have this done in the next 4-5 years. Looking back we are pretty annoyed we didn’t hike Cascade’s “sister” mountain, Porter last year so we will probably be repeating that hike!

Big Slide Mountain via the Brothers – #2

Today we woke up at 5am and aimed to get to the Garden trailhead for 6. The parking lot was about 80% filled with Ontario and Quebec licence plates since it was Victoria Day.  We attempted to do this hike back in October but the trailhead parking lot was full and the weather wasn’t great so we ended up saving it. I’m glad we did, there was lots of parking and the weather was sunny and gorgeous today. We signed in at the register around 6:30 after dilly dallying around the car for too long and headed off! 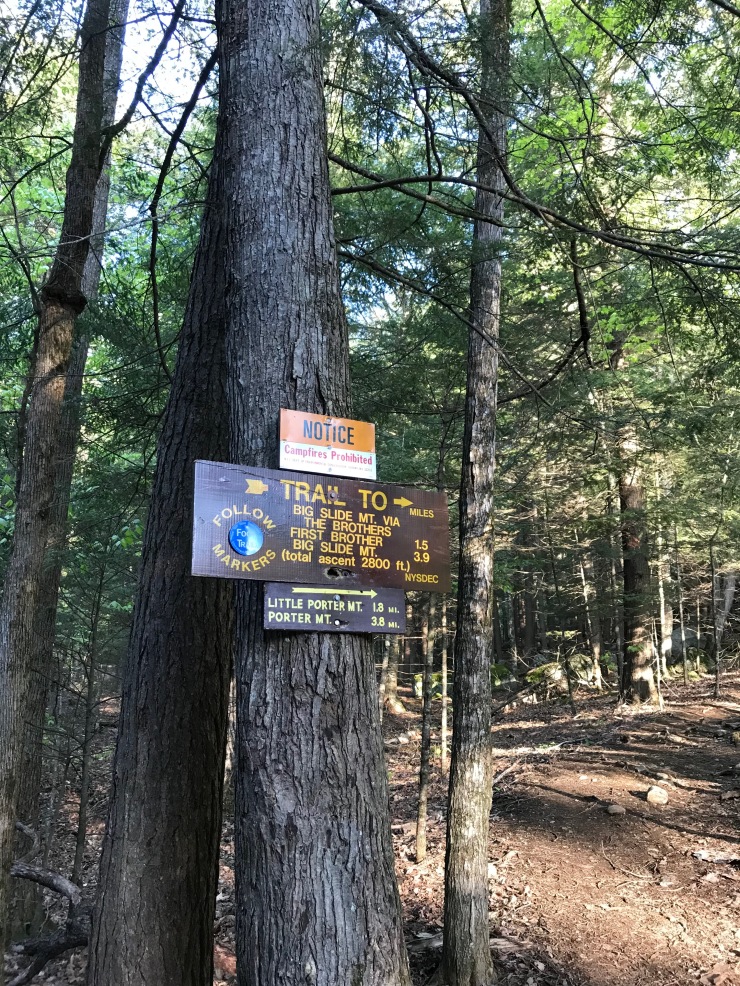 The beginning of the trail was gentle and quiet, we were the only the second group to sign in for the day. After a little bit of walking through the woods we reached a ledge where we saw some of our first views.

Back into the woods and it wasn’t long until we reached the summit of the first brother (2940 feet.) We were trying out our poles for the first time and found them helpful, until all the rock scrambles!

we admired the views quickly and walked straight ahead since we had taken a quick banana break at one of the earlier ledges. After looking in the distance we saw some scary looking rock scrambles towards the other brothers and the summit of Big Slide! It looked so close yet…so far…

We trudged on towards the scary looking rock scrambles of Brother #2. It wasn’t that bad upon arrival but I was a bit worried about coming back down since it was pretty steep.

The views of the Great Range just kept coming, if you just feel like taking a short hike, stopping at one of the brothers would be a nice little hike. After summiting Brother 3 we were back in the woods where the scenery was changing a bit. We found patches of leftover snow and the trail was covered in “Mudice.” We took out our microspikes for a but which helped but the ice was pretty patchy so we took them off pretty quickly.

Some of the icy areas were pretty steep and we saw some people really struggle to get up so we put the spikes back on! After trudging through the mud and ice for what felt like forever we reached a junction sign!

“Yay! only 0.3 miles” Then we looked ahead at what was probably the steepest 0.3 miles I have seen to date. Not many photos of this area since we just wanted to get to the top. There was a fun (sketchy) ladder that we went up where I was again worrying about coming down.

After a few more rock scrambles we were on the summit! By then a few groups had passed us and were already relaxing on the small summit but there was still plenty of room to relax. Immediately we plopped down and took off our shoes and ate our PB&J and Pringles. Summit Pringles are the best. They travel well and you can use the container as a garbage can after you inevitably eat the whole thing at the top.

After about 30 minutes of resting on the summit we continued on our way down. We buttslid off the big granite slab just before the summit and made quite the scene. We stopped at another lookout for photos and then began our gruelling descent.

Going down was 100x harder than going up! At this point I had developed some nasty blisters and my toes were slamming against the front of my shoes. Heidi rolled her ankle about 3 times. It took us way longer than it should have but we made it down!

After many breaks we finally saw the sign marking the trail towards Brother #1 and we made it to the car! Took us about 2 hours more than I had expected but oh well!